What is that noise?

I’m standing in the hospital bike locker and I hear a distant alarm going off.

At first, I don’t think much of it.

I’m in the city, after all, car alarms are a dime a dozen.

My brain has taken note of it.

The constant drone turns into a incessant beep.

I look all around.

It sounds near, yet far. 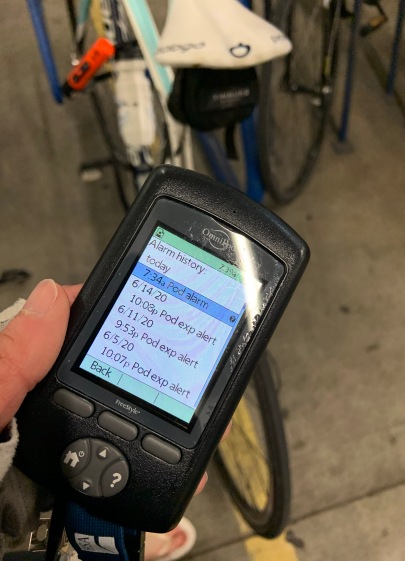 I want to love biking to work, I really do, but after last week’s pod debacles (note the plural), I’m feeling pretty discouraged.

The first day, my blood sugars surged for no reason shortly after starting the ride and kept surging throughout and beyond. I suspect it had to do with starting a new rotation in my internship causing the stress hormones to kick in and be complete turds. 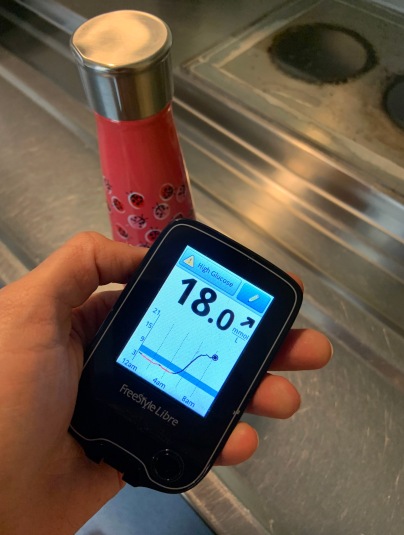 The diabetes drama didn’t stop there.

My pod decided it wasn’t going to work anymore – 15 bloody minutes before I reached my hospital destination it completely crapped out.

I had no idea.

I suspect the error was due to my new cycling bib shorts and the location of the pod being directly next to the bib suspenders, which were probably rubbing against the pod, shifting it in a way it didn’t want to be shifted.

Sigh, the things we need to think of when cycling with T1D.

The second ride of the week, I wore my commuter cycling shorts and had my pod high above the waistband to make sure there were no further pod irritation issues. Yet, 20 minutes before reaching the hospital, the pod again crapped out!

This time I actually heard the alarm during the ride, which made the remainder of the ride super pleasant – note the sarcasm!

In the 1.5 years since I’ve had the Omnipod, I never set off the alarm. Not even when I was intentionally trying to set it off could I set it off. But here I am, not quite a month into my bike commuting life and I’ve set it off THREE times!

I’ve set it off when inserted in the stomach and the arm. I don’t know if it’s the location of the pod, if it’s the clothes I’m wearing, or the bumpiness of the route, or what.

Regardless, I’m not super thrilled about it. 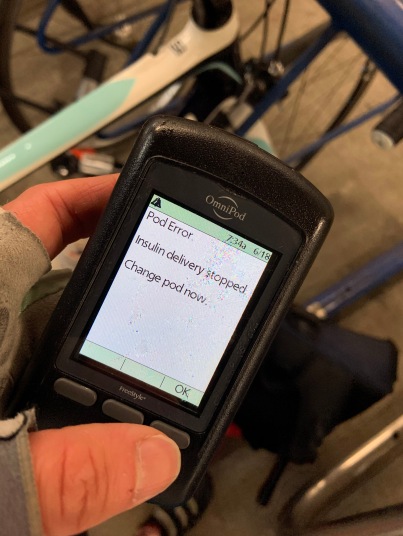 My legs are tired.

I don’t know how people manage to bike to work every day.

My diabetes is tired.

I know this is all just part of the trial and error growing pains. But for someone like me, who finds pride in controlling my diabetes, not the other way around, experiencing these peaks and valleys and the effects of them is exhausting.

2 thoughts on “Perils of the pod”

What do dietitians eat 🤔
Hands officially connected for 12 years strong 🥰
Yesterday my husband asked me what I wanted for dinner.
From this >> to this >> to this.
Oh, hey there 👋
Dear Diabetes - it’s your birthday 🥳
Last week I did something pretty freaking BIG 🤗
Hi friends 👋
Family vaca-bike trip in the books!
Oh the awkwards.
Ready for a T1D-style morning hike.
Have you ever run your heart out, finishing last place, but still feeling like you were first crossing that finish line?
Type-1 diabetes is not easy.
Holy hell, it is freaking hot out there 🥵
Not sure it was the wisest decision to ride 92 km in upwards of 37 degree heat, but when you’re kid free for the first time in forever you take the opportunities when they come - no matter the heat 🔥
Today on the blog I ponder the pitfalls of promoting perfection for type-1 diabetes management.